Orlimar started out as a family run, San Francisco based business, with Jesse Ortiz as its chief designer. He was responsible for designing clubs known as the “Tri-Metal Woods”. Orlimar began with persimmon clubs, and its woods were used by some very famous golfers. Johnny Miller, Tony Lema, and Ken Venturi, all use Orlimar clubs in their game. It is thought by many, that Orlimar started the golf club market movement to a thinner faced club head design.

We’ll be providing all our readers with plenty of Orlimar golf club reviews, but here we’ll be giving you a more general run down of the company and the clubs they have provided for professional and amateur golfers alike.

Orlimar clubs make use of bi-metal, tri-metal and titanium technologies, which help them create long hitting clubs. Aldila NVS graphite shafts are a feature of their drivers, along with Golf Pride Tour Velvet grips, and loft angles of between 8.5 and 12.5 degrees. Their irons and wedges are made using a forging process and are made from carbon steel. Shafts come in steel or graphite. Grips are Golf Pride New Decade. Orlimar also have a range of anti-slice graphite-shaft hybrids. Their putters make good use of core-weighting technology, which affords players stability and balance.

The benefits of Orlimar clubs

Orlimar drivers are surprisingly long off the tee, which is all down to their size, weight balance and design. Even if your swing is not overly powerful, you can still gain some advantage. When it comes to accuracy, Orlimar drivers are easily comparable to lighter and smaller types. Their forged irons are perfect for fairways that are on the tight side and for landing areas. Both beginners and veteran players will find their putters suitable, due to the peripheral balance and smooth motion.

The downside of Orlimar clubs

Here at golfclubreviews.org we endeavor to be as honest as possilbe. Which is why we’ll always try to mention any disadvantages in our golf club reviews. And we’re not going to do anything different with our Orlimar golf club reviews. Some golfers may find a problem with steep approach angles, because of the shallow face and low center of gravity of Orlimar drivers. Together with fairway woods, their drivers also have a smaller head and sweet spot than popular oversize clubs. For inconsistent players and beginners, this can however cause problems. 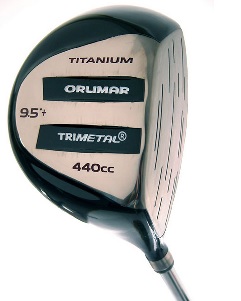 In 1998, Orlimar, and its chief designer Ortiz, revolutionized golf club design, by introducing trimetal clubs. Combining a stainless steel body, steel face, and copper weights all in one club. The design also had a shallow face which meant it would be easier for golfers to get their ball in the air. Especially if hitting from a bunker or the rough. Annual sales rocketed as golfers found the design very attractive. Sales went from $1 million to $105 million in just two years.

However, their success was very short-lived. Their investors, who had come on board to help finance the launch of the TriMetal, wanted the company to diversify their product line, and include other types of golf irons and golf balls. The company’s position as a niche product manufacturer was undermined and a dispute came into play with TaylorMade and Calloway.
Cash flow problems quickly ensued and the company was unable to stay afloat.

In 2003, King Par came to the rescue and bought the company. At the same time, Ortiz departed and went on to design for Bobby Jones in 2014. A new club was launched by Orlimar, called the Driv-Bird, which they claim is the perfect hybrid club to tee off with, wherever you might be on the green.

What was so innovative about the Orlimar Tri-Metal design?

There are a few factors that made the Trimetal design different from clubs that were currently on the market. A classical and traditional face design was the opposite of popular oversize clubs. The combination of three metals gave it unique weighting properties, which made it easier to hit, with the bonus of added distance and spot-on accuracy. The metal face is heat-treated and has a high composition of chromium and nickel which make it much harder and stronger than pure titanium. The Trimetal club is substantially lighter but retains its strength. Removing the weight from the club face means it can be redistributed throughout the clubhead, making it more accurate and far easier to hit. In the soleplate are carefully placed copper-tungsten weights that produce a low center of gravity.

With all these benefits it’s no wonder the Trimetal design became so popular, and still is today.

Orlimar golf club reviews – An affordable set of clubs HE2

To finish up our Orlimar golf club review, we’re going to introduce you to a set of clubs that are more than affordable for the average player. The Orlimar HE2 men’s combo golf set is comprised of a forged 10.5 degree 460cc driver, fairwood with a low-profile, 4 hybrid, 5-PW irons, and a mallet putter with alignment marks. Perfect for the beginner as the set is color-coordinated so the woods and irons don’t get mixed up. Included in the set is a durable bag with a kickstand, which means you don’t have to lie the bag down at every hole. Headcovers are included for club protection.

This set of clubs is a little more expensive than some of the other sets available, but will be a great investment because its high performance makes it stand out from the crowd. The clubs included in the set feature a high-energy release design, to help generate more distance and higher angles of launch. The alignment marks on the putter are an obvious advantage. The woods feature graphite shafts, with the irons having steel shafts.

We hope we’ve peaked your interest with the first of our Orlimar golf clubs reviews, and spurred you into adding us to your favorites. Here at golfclubreviews.org you can be sure of an honest opinion. We love the game of golf as much as you do, and our only aim is to help you play much better and enjoy every game you play.